Book 3 in The Mercy Series 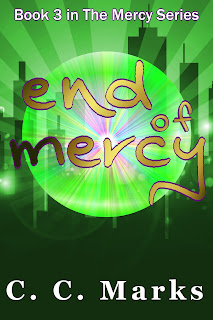 After a treacherous journey, Charlie is finally safe behind the walls of The Mercy Research Hospital. Yet, even as she’s relieved to be free of danger, things aren’t all they seem inside this secure world. Revelations about the research conducted in The Dead Forest and the role she played flips her world on its head and makes her question everything she knows as truth.

Once again, with much against her, Charlie must take action for Star, Thomas, and all those she’s come to care about in order to prevent the plan to wipe out everything…and everyone…remaining in the forest. And even as Charlie allows herself to relax, she meets Dr. Drake, the medical researcher who insists she’s creating a better world. Of course, once you’ve fought off Draghoul and all the stuff of nightmares, a doctor with unclear motives is just one more challenge to meet.

For once in my crazy existence, I wanted to walk away from a situation instead of sprinting for my life.  Clearly…not…gonna…happen…today…Charlie.
I ran down the hallway like fire already blazed behind me.  Thanks to someone who shall remain nameless until I could find him and slap him upside his giant head, someone who acted before he thought, the whole world of Mercy was about to come tumbling down any minute, and I had only seconds to get…freaking…gone.
Fortunately, I didn’t have my sister Star with me.  I’d sent her ahead, knowing things could get ugly really fast, and sure enough, they were about to.
The first explosion sounded behind me and I heard and felt the pieces of concrete and glass flying through the air all around.  I stumbled forward as the force of the blast hit me from behind, followed by a wave of intense heat that singed my exposed skin.  My ears began ringing, but whether from the sound of the detonation or from the stress of the situation, I wasn’t sure.  Didn’t matter anyway.  I needed to get through the door at the end of the hallway before the next explosion discharged.  It would trigger the rest of the ignitions and everything would go the way of what remained of the entire civilized world.
Just as I felt the rumbling beginnings of the blast, I flung my grasp at the handle of the door and barely noticed the warmth of the metal before swinging the door wide and throwing myself through it, pulling it closed just in time to hear the whole world explode in a fiery ball of destruction behind me.  The floor beneath me seemed to rock side-to-side and shake top-to-bottom.
I didn’t pause to experience it for long though.  Instead, I took the stairs two at a time, flight after flight, until my chest ached with each labored breath.  I looked up to see a large number three on the side of the wall next to the door, worn but still clear.  I yanked open the door and sprinted down the darkened hall, the beam of my flashlight bouncing as I ran, and I pictured each turn to take to get to my destination.
After two right turns, I stopped in front of a large, steel door and rested both hands on the cool surface, hanging my head and working to catch my ragged breaths.  Each pull of air into my lungs burned, but it wasn’t enough to stop me for long.
The key was in the lock before I took another breath, and I was past that impediment and on to the next one.  I began knocking on every door, unsure in which room I’d find what I was looking for.
Movement on the other side of one door brought me back to reality.  Time was limited, and I wanted free of Mercy and all its horrors.  On the other side was either a hungry Draghoul, waiting to infect me or the person I was after.
I shook my head and worked the keys into the lock.  “Gretchen?  I’m here for you.”
“Charlie?”  Her relief was palpable as she said my name and gave me the reassurance I needed to know she wasn’t in too bad of shape.
“Yeah.  I’ve got the key to get you out.”
Her voice seemed so small and confused as she asked, “Why?  Why did you come back for me?  You don’t…you don’t even like me.”
Why did I come back for her?  She might be a first-class, pruny-faced beyotch, but leaving her had never been an option.  Not when there were no other people in the world like us.  It would be like killing the only other unicorn in a mythical forest.  “Don’t know.  Maybe I just can’t leave knowing you had the last word.”
I turned the key until it clicked softly and pulled the creaky door wide.  The sight of her turned my stomach, not because of how hateful she’d been to me, but because the evidence of the treachery of Mercy was clear in every swollen bump and discolored bruise on her face.  Her survival was a miracle after what the General had obviously done to her.
Gretchen laughed humorlessly.  “Seems like that’s an argument for saying, ‘See ya, loser!’ if I ever heard one.”
“Look, we don’t have much time before this whole facility goes up in a blaze of shame.  You coming or not?”
She actually looked at me a few extra seconds, as if she were thinking through the possibilities of running away with her life or staying here to die.  I didn’t have time for this!
With surer steps than I expected from someone who looked like she’d tried to catch a falling oak with her bare hands, Gretchen moved out of the door and in front of me.  “So, those were explosions I heard.  Come on!  I know the quickest way out.”