Book 2 in The Mercy Series 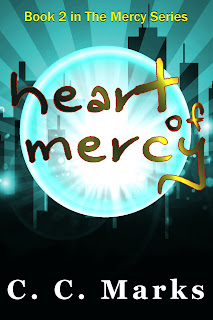 Charlie Little exists in a dangerous world. Her best chance of survival is to disguise herself as a boy and guard her secrets well. Yet just when it seems things can’t possibly get worse, they spin completely out of control.

With Zeke and her sister Star by her side and the fresh memory of Thomas’s kiss still on her lips, she narrowly escapes the horrid plans of Jonas Bannon, a monster of a human being. Forfeiting the safety of the community, they leave and begin the search for the city of Mercy, the one secure place Charlie knows. However, as she struggles to reach her sanctuary, doubts creep in that anywhere is truly safe. If the Draghoul don’t get them, the human scavengers just might, and the assumption they’ll find protection in Mercy could be the most dangerous risk of all.

He shook his head once, and I watched the muscles in his jaw undulate. Was he holding back to protect me or himself? I didn’t care. I needed to hear directly from him just how much he regretted bringing me. “Just say it! If Star and I weren’t here to slow you down, you’d be in Mercy right now.”

“What the…Charlie, I never said that.”

“You didn’t have to. I know it’s true. We’re just something else in your way.”

He snarled and hit the back of his head against the headrest twice before stopping the car and shifting the gear until he could take his foot off the pedals and turn to face me. At that moment, the car sputtered and died. We were on a hill in the middle of the road, but Zeke didn’t seem to be worried about the vulnerable position we were in. I glanced around nervously, taking note of the tree line bordering the crest of the rise in the road where we’d stopped, visible to creatures currently stalking us as prey.

“Could we just keep moving?”

My heart squeezed in my chest. “I don’t have a problem with that, Zeke.”

“Let me finish. Charlie, you’ve been a good friend, probably my best friend. I have to admit, the fact you’re a girl makes things a little awkward now, but that’s all getting jumbled in my head until I feel this sense of obligation to keep you safe, but at the same time, I know the realities of this world. I’ve lost my mother and my little sister. No one is safe here. Yet, the thought of letting those…those things anywhere near you fills me with a fury I can’t handle. I have a driving need to protect you, but I feel so helpless to do it.”

I laid my hand on top of his until he met my gaze. “Neither you nor Thomas could protect me in the community any better than here, Zeke. There, it just would’ve been a different kind of monster that attacked.”

He pushed his breath out noisily through his nose as my words sunk in. We sat in silence, and I watched his lips part to release the thought swirling in his eyes, but it never hit the air. At that moment, a grotesque figure, with yellowed, needle-like teeth, dropped onto the hood of the car. I screamed as another gray hand clawed at the passenger-side window. The cracks in the window from our close encounter with human scavengers tensed and released with each swipe of the creature’s hands, and each claw made a piercing scrape as it slid over the surface of the glass again and again.

A quick glance at Zeke’s window showed bloodshot, wolf-blue eyes there too, and as I swung my gaze to peer out the back window, it was blocked by two more rotting, scowling faces. We were surrounded.

“What do we do?” My voice lifted above the clamor of the Draghoul’s desperate attempts to get at us, but it was clear we really didn’t have any viable options for escape. Even as I watched, more monsters began to squeeze into the fray until it seemed the entire car was surrounded by a writhing horde. My window bowed with the weight of the bodies pressed against it, and I watched in terror as a piece crumbled away from the middle. Any minute, a claw would reach through and end all my hope with one infectious scratch.

Zeke reached for the keys in the ignition and turned, but the engine didn’t catch. He tried several more times. Yet there clearly wasn’t enough gas to even start the car, let alone drive it out of this mass of tangled bodies. I pulled at the buttons on the door handle to be sure the window was completely up, but nothing responded. Either it was already up or the button didn’t work when the car was off. My heartbeat raced with the panic settling into my brain.

“I don’t know.” The wild look in Zeke’s eyes scared me even more. There was no way we would survive five more minutes.

But Zeke’s eyes widened briefly, and he whipped toward the backseat. “Wait! Where’s our bag?”

The car began to pitch forward and backward as the creatures became more frantic to get at us, and I soothed Star’s cries as best I could. A warm liquid traced down my cheeks, but whether it was tears or sweat I didn’t know or care. This wasn’t a way to die.

Zeke jerked the bag through the space between our seats and held it on his lap. The car was rocking harder now, the squeak of the metal underneath us loud enough to be heard over the cacophonous moans and screeches of the monsters around us.

I leaned toward the bag as Zeke opened it and pulled two guns free, handing a small one to me.

“What am I supposed to do with this?”

“How? There’re way too many.” As I glanced out the windows, the only place I could see any clear space was at the front of the car. Though figures covered the windshield from the sides, few actually stood in front. Maybe it was too far away from their target, or the hood’s warmth repelled them. Regardless, it gave me an idea.

Long ago, I remembered my father moving a stalled car out of the road for a friend of ours. I glanced around the landscape and though I couldn’t see much, recognized the car’s position could help us. I glanced at the gearshift but needed Zeke to help me find the right gear.

One look in his direction showed the determination to survive evident in the clench in his jaw and the sharp movements of his hands as he loaded the shotgun.

“Zeke.” He continued his actions as if he hadn’t heard me at all. Maybe he couldn’t hear me over Star’s cries or the noise of the mob surrounding us. And the rocking of the car became violent. It was only a matter of time before the monsters ripped and smashed into the car. I needed to get his attention now. “Zeke!”

His head snapped in my direction, and his hand paused in mid-air. “Load your weapon, Charlie.”

“No, listen. Which one of these gears will let the car move without the engine?”

“What are you talking about?”

His gaze dropped to the gearshift, and he stared at it puzzled. “How can that help us?”

The window beside me groaned and bowed closer to my head. We had to act now or the Draghoul gnashing its pointed teeth at my face was going to break through and rip me apart. “If we put it into the right gear, they’ll push us down the hill. Once we are away, we can get out with our weapons and find some place to hide.”

He nodded slowly and reached for the gearshift. He pushed the button and tried to pull the shifter down. It wouldn’t budge. “It’s not working.”

“Try turning the key a little and putting your foot on one of the pedals, whichever one holds the car still.” I sounded like an idiot. I’d been surviving and hiding since I was fourteen, and I was sorely lacking in the knowledge most seventeen-year-olds learned in a world without Draghoul, but some vague memory of cars pushed me to suggest it.

Though doubt etched every corner of his face, he didn’t question me, just pushed his foot down and twisted the key until the red lights of the dashboard shone a dim light on the interior. As if sensing they were about to lose their prey, the crowd around us worked into a higher frenzy, slamming against the outside of the car. With a shaking hand, Zeke reached for the gearshift. He gripped the handle and pushed the button.